Joe Strummer’s community blue plaque was unveiled on the 7th of December 2016 at 33 Daventry St. NW1, the squatting location where Joe Strummer lived during a pinnacle creative period in 1978 and 1979.

The Poseidon Adventure – Part III: The Siege of Athens 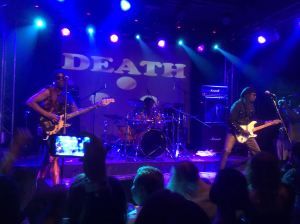 As we slowly entered Piraeus I almost regretted partying that hard on the deck. Through my hazy sunglasses I watched as we sailed into the legendary harbor. It’s an absolutely epic way to enter Athens. As the sun was setting we could see the endless skyline and the mountain chains in the distance.

The Poseidon Adventure – Part II: Poseidon and the Mermaids 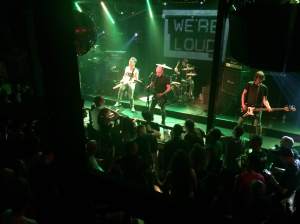 It was time to say goodbye to northern Greece and get on a plane to the Island of Lesbos. I guess it was the first time that the 40-odd crazy souls that made up this traveling circus met in daylight and fairly sober.

The Poseidon Adventure – Part I: Ten Days and Ten Nights at We’re Loud 2016 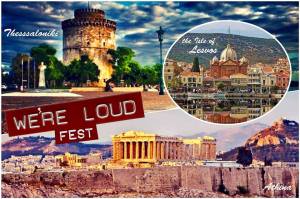 A quick note before I start with this latest gonzo adventure: As some of you have already heard, the first part of the festival had to be moved last minute from Istanbul, Turkey to Thessaloniki in northern Greece. It just got to hairy with the failed military coup and the all-round political instability.

I wasn’t planning on going to mainland Spain this year, as I had already done a few trips and was saving free days and money for the upcoming We’re Loud Fest 2 in Greece. But I had gotten so sick of this project at my work that we were stuck with for the whole summer. I had to get away. Well, a little fix of Spain and spending some time with my hermano, Leandro, in my second home of Bunyol, always does the trick.

The Teamsters, the group in which I play had not been on the road for at least a year and a half. We’d been trying to find a full time drummer to replace original drummer, co founder and songwriter Bret Bolton, a name with which you may or may not be familiar with. His unfortunate departure was the result of an even more unfortunate turn of  events when we were supposed to board a plane to Dublin. We went anyway, drummerless and faced the music.

I decided to write this piece after having discussions with different people, including my girlfriend, regarding the location of the second We’re Loud Fest, to take place in Istanbul, Ayvalik, Lesbos and Athens at the end of September.

A Double Dose of Heatwave Madness: How I Survived Two Launches and Lived to Tell the Tale

My better half and I decided to stay in London for the weekend, as we both hadn’t visited in a million years. We were gonna fly out on Friday February 19 to meet with the bunch and go check out the Parkinsons at a Turbojugend gathering. I didn’t know that semi-tongue-in-(butt) cheek cult was still going on, but was looking forward to finally seeing those crazy ass Portuguese guys live. It wasn’t to be though, as our flight was delayed three fucking hours. So we just met with Joseber from Johnny Throttle, who was kind enough to let us crash at his place for the weekend.

Praise be unto the punx: A story of finding something unexpected in the SE Asian punk scene

Let’s try to establish the common political values of a punk. One would expect a typical ‘punk’ to be anti-authoritarian on some level with anti-capitalist, anti-religion, anti-fascist, anti-racist leanings, and sceptical of any other systems of social injustice. When I go to a punk show, I pretty much assume everyone there to hold these values without bothering to debate them. Well, my experience spending time in Indonesian and Malaysian punk scenes challenged my expectations of punk.

Fear and Loathing in Athens: A Gonzo Account of Four Days and Five Nights at We’re Loud Fest

I love when it rains in Amsterdam. That is, if I’m about to jump on a plane towards the Mediterranean Sea. My excuse for travel this time was that Slovenly Records organized a rock ‘n’ roll extravaganza: We’re Loud Festival in Athens, Greece.

It has become some sort of tradition to swap the “Big Smoke” for “Tor zur Welt” in the last English Bank holiday of the year before Christmas. People always ask me why Hamburg? Not that Hamburg is a bad place, but there are no beaches and the weather is not always great. Coming from London, I always try to escape to places where the weather is a bit more sunny! However, with relatively cheap flights, good music (13 bands in 2 days!), cheap booze and food, friends from all over the world, Hamburg becomes the place to be at the end of August!

The Drunken Chaos That Was Rebellion Fest 2015

Dealing with a tube strike, a lack of sleep and a nasty hangover that made me almost miss the bus to Blackpool, I finally made it to Rebellion Fest.

Realizing I missed Sick Of It All, I rushed past the crowd of Fred Perry’s and studded leather jackets in front of Winter Gardens to watch The Business. It would be my sixth time seeing them, and once again they didn’t disappoint with playing every song I wanted to hear with lots of energy and intensity.

Yamatsuka Eye, the Boredoms and me

The Station to Station festival curated by the Barbican, started this past month in the most impressive way, with a live performance from the Boredoms at the auditorium. The auditorium filled to the top with eager fans waiting to enjoy, what would become one of the most amazing live sets that I’ve ever seen. At the same time, this was the gig that I’ve been waiting for, for 23-fucking-years… You can imagine how high my anxiety levels were.

I invite all of you to join me and go back in time to June 27, a day that I decided to commemorate by tattooing an eye drawing on my skin.  And yes, I was totally high.

About six months ago I was sitting on a plane somewhere over Michigan when it struck me that I should be listening to the Supremes when I spotted Detroit for the first time. As the plane approached Metropolitan Wayne County Airport I stared out the window, not wanting to miss a single detail. There she was, the Motor City. It was everything I could do to keep myself from crying.