Let’s try to establish the common political values of a punk. You would expect a typical ‘punk’ to be anti-authoritarian on some level with anti-capitalist, anti-religion, anti-fascist, anti-racist leanings, and sceptical of any other systems of social injustice. When I go to a punk show, I pretty much assume everyone there to hold these values without bothering to debate them. Well, my experience spending time in Indonesian and Malaysian punk scenes challenged my expectations of punk.

There is definitely one of the aforementioned values that does not seem to penetrate the scene in Indonesia and Malaysia. Can you guess which value? It’s anti-religion. From my experience, about 75% of the kids in Indo and Malay scenes are still religious or, at least, don’t completely reject religion and it even comes up for discussion. This is not surprising considering that both of these countries have Sharia Law and rejection of Islam can often get you shunned by one’s family.

During my time in Indonesia, I got to speak to one government official that said there is a big presence of Al-Qaeda in Indonesia. In the areas where Al-Qaeda is most present, members are elected into government. You can imagine what life must be like there if you tried going against the status quo. Statistically, Indonesia has the most Muslims in the world according to Pew Research Center. One more crucial thing, it is evidently illegal to be an atheist in both Indonesia and Malaysia. When one gets a passport, one must state a religion. Now that’s just the official stuff, nobody can control your mind!

I arrived to the capital city of Indonesia, Jakarta, after a month and half in Papua New Guinea. At the time, I could not handle any more tribes, jungle or any kind of culture outside my decided comfort zone. I was determined to find some punks to see some crazy Indo grind bands that are renowned in the Asian punk scene. I met up with my Californian friend, Ryan. We didn’t know anyone at that point so we got a hostel. On the first night, we took a casual stroll down to Old Jakarta. It was full of street tattooists that were working in open air among the street dust. It was so DIY that their hygiene seemed questionable. There were also many stalls that sold alternative clothing and band shirts that were mostly sold by people on the ground. We approached one of these stalls and exchanged knowing nods with the two punk merchants. After about 30 seconds of looking at their merchandise, one of the sellers asked us, “Arak?” Arak is the local alcoholic spirit (40–63% Alc.) in the anise family of drinks. Little did I know at the time that this would be how most of Indonesian street punks would communicate with us during our stay.

Ryan and I quickly accepted the invitation, gave a little money to him and stepped over to the other side of the stall where tiny chairs were arranged in a circle. Five minutes later, someone on a motorcycle arrives with two 0.5l plastic bottles of clear liquid and we start drinking shots from the same cup passed around (Indonesian tradition) the circle. As the night goes on, more and more people arrive. Few of them speak English. Our method of communicating is one-word questions with a thumb up or down, like “Arak?” thumbs up, “Dropdead?” thumbs up and “Cock Sparrer?” thumbs down. Most of the kids are heavily tattooed with their faces and necks covered, despite some looking very young. For example, our new friend Ujang was just 19. They all want to take pictures with us too. When the time arrived to get more Arak, Ryan decided to go with Ujang on his motorbike to get it. Later, he said they went deep into one of Jakarta’s slums into a dodgy-looking shop where they bought two more of those unmarked plastic bottles of clear liquid from behind the counter. 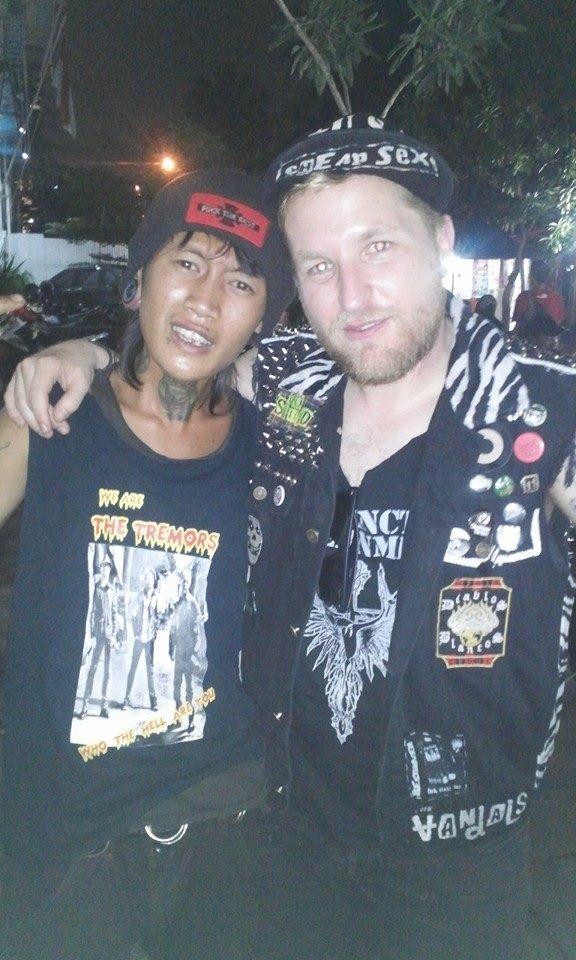 We spent a few nights drinking with these guys at different stalls and started getting to know them better. Ryan once asked Ujang where he sleeps and he just pointed at a covered area behind one of the stalls. I am not sure if he was lost in translation or a true street kid. 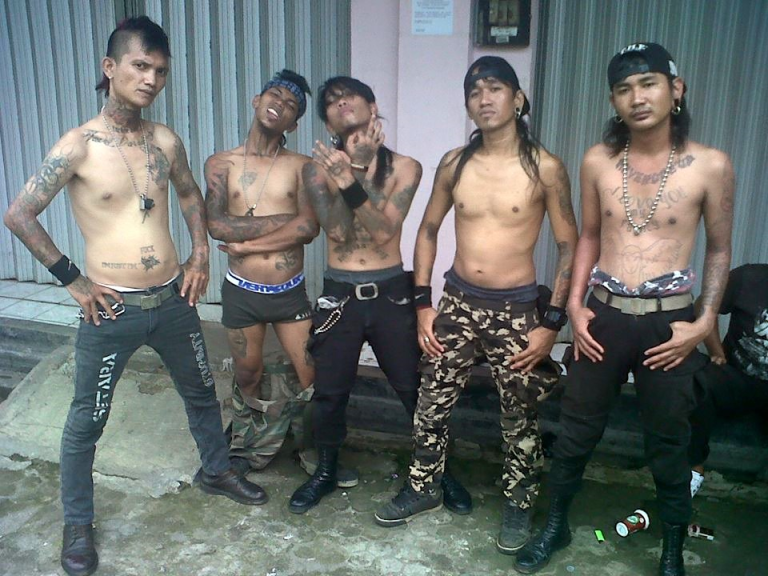 Fast forward to Kuala Lumpur (KL), Malaysia. Ryan and I stayed at this punk house called Rumah Api run by Man Beranak, which welcomes all travellers. The house puts on shows and acts as a social centre to for the scene in KL. Down the road is another punk house called Lock Up, so you can imagine the area (Ampang) is swarming with punky types. I spent close to a month in that city and only left Ampang about three times to do some mandatory tourist things like looking at some buildings. As a result, I have hung out with a lot of people in the scene and attended many shows.

I’ve seen a lot of interesting things during my stay, like a lot of girls don’t drink and only smoke. Is this something to do with Islam? They show up to shows wearing head scarfs and they go in the pit wearing head scarfs too. Of course, there are girls who have completely rejected Islam and even go without covering up, like my friend Salwa who bravely shows her hair unlike the majority of girls that cover up. The commonality is an appreciation for punk. I have even seen someone rocking tartan trousers and a leather jacket with a head scarf!

I asked my friend Wan, who runs the Tandang record shop in KL, about Islam in the scene. He confirmed that a lot of alternative types are still very religious. Wan plays in an awesome fastcore band called CRIMESCENE. He said once on stage someone from his band shouted, “Fuck Islam,” or something along those lines, and there was a big disturbance in the audience– a lot of people disagreed.

Probably the best illustration of Islam in the Indo/Malay scene comes from my last day in KL when I went to a grindcore all-day event. Now, grind is as big in Malaysia as it is in Indonesia. In other places in Asia, Malaysia is known as the epicentre of grind. An example of this comes from the time when I used to live in Korea. Punk started in the early 1990s and the scene is essentially less developed there. I lived in Korea in 2014/2015 and grind was just starting to get big in the Seoul scene with kids starting new grind bands. Once I recall someone saying, “Why are you playing grind? Do you think you are Malaysian or something?” While I am not a massive grindcore fan, I was still stoked about this grindcore all-day event; finally I got to see what the fuss is about. 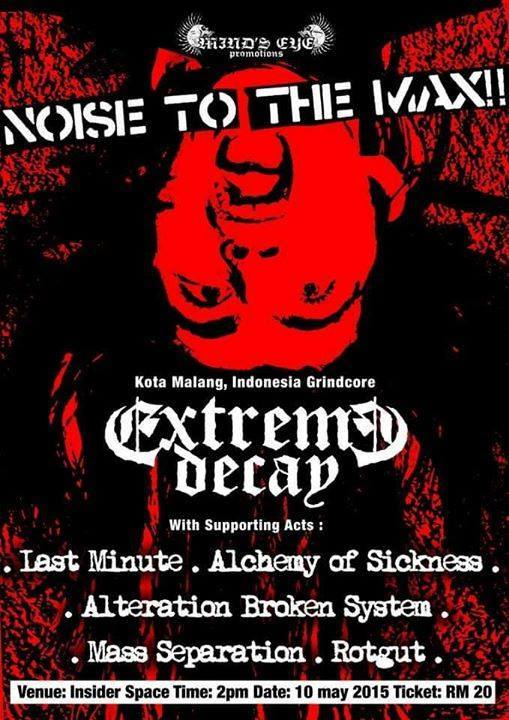 One of the bands that I was looking forward to see was MASS SEPERATION, which is a very powerful grind band with husband and wife on vocals. Naturally, the gig attracted a big crowd with many Indonesian fans. After about three bands played, everyone seemed to disappear and people switched on the lights. “What’s up?” I asked Niesa from MASS SEPARATION, who was one of the few people who hadn’t left, “Your band hasn’t played yet!” She answered, “Don’t worry, we will play. This is just break time.” I was confused. Since when do you take a break from a leisure activity? Niesa further explained how it was prayer time and the show would resume in 20 minutes. In 20 minutes on the dot, the show had continued and there was a massive circle pit of Indonesian youngsters going absolutely ballistic by the stage.

So all in all, the scene in Indonesia and Malaysia may look and sound similar to its roots in the West, but when you dig deeper it turns out a lot of the people are still religious, something that doesn’t even come to my head when I think about most punk scenes. I was surprised that in spite of religious beliefs, like the non-religious punk kids, the religious ones still hold liberal values and gave Ryan and me an incredibly warm welcome. As much as I hate religion, I must say that it doesn’t spoil the scenes there. People still rock! In fact, I look at Indonesia and Malaysia like my second home now, and I still keep in touch with all the wonderful people I have met there.

I want to give a big shout out to Ryan Ihm his help with this article!