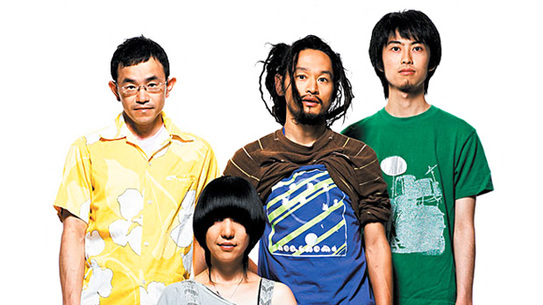 The Station to Station festival curated by the Barbican, started this past month in the most impressive way, with a live performance from the Boredoms at the auditorium. The auditorium filled to the top with eager fans waiting to enjoy, what would become one of the most amazing live sets that I’ve ever seen. At the same time, this was the gig that I’ve been waiting for, for 23-fucking-years… You can imagine how high my anxiety levels were.

I invite all of you to join me and go back in time to June 27, a day that I decided to commemorate by tattooing an eye drawing on my skin.  And yes, I was totally high.

The Boredoms are a Japanese band formed in the late 80s… blah, blah, blah, blah… fuck sake… They are legends. They are the fucking Boredoms. Lets go straight to the important stuff. What the fuck happened in the Barbican on June 27.

With the tickets grabbed months in advance, I was excitedly counting down the days, waiting for Saturday to come. I had two tickets, one for myself and a second for a good friend, a friend I wanted to give the best birthday present. She didn’t have any idea about what she was going to see that day, and like all of the people in the Barbican that day, she left impressed with a big smile on her face.

Due to the importance of the event, I needed a wide menu of candies to be sorted out by my own personal Dr. Hoffman. The menu was a mix between high grade, molly, speed and opium. Not too little, not too much. Moderation is always a virtue my good friends. Finally, the day arrived. I couldn’t sleep the night before—I was really tired and nervous.

The staging made it seem as if we were about to see something big. Two big screens at each side of the stage show a view of a big circle of four colours—green, orange, yellow and magenta, where everything is placed for the show. The big screens are positioned so everything can be seen at its zenith. Yamatsuka Eye’s electronic devices are in the middle, surrounded by a circle of five drum kits. The circle of drums is surrounded by, I don’t know exactly, maybe ten guitar amplifiers. And the guitar amps are surrounded by another circle of 44 spaces for 44 cymbals players; this circle was surrounded by another circle for 44 more.

At last the show began, but my guest hadn’t arrived yet… All of the performers started to enter the stage. The cymbal players were all dressed in coloured shirts, like the colours of their places in the circle, the guitar players, the other drum player… and the proper Boredoms, at last in front of my fucking eyes.

With Yamatsuka in the middle of all of them, like a kind of Von Karajan, started to conduct the cymbal players with simple movements of his arms, based on speed and intensity. It seemed like the sound of the sea, with waves coming and going. Little by little the electronic music started to add tune to this marine sound.

The drums start to play. One of the drummers started a rhythm like a metronome. All of the players started to join this massive sound wave; a sound wave conformed by the electronics of Yamatsuka and was amplified by the other drummers. The fuzz of the guitar players and the amazing coordination between these 88 musicians made this gig into something really special.

It was kind of like an electronic percussion tsunami. I couldn’t properly distinguish any of the songs I knew until the moment that made me raise my hands in the air like Ronnie James Dio, the start of the song “Circle”, which starts the Vision Creation New Sun album.

It felt like my birthday, Christmas and the first time that I fucked had all rolled into one. It was that good. My mouth and eyes were wide open, while I banged my head and sang Vision Creation New Sun to myself, as Yamatsuka sang onstage.

While all of this is happening, the only thing my friend and I can do is look at each other and only say, “ fucking amazing”.

“Circle” began to finish and the sea sounds started again, like these 80s yuppie machines that were supposed to help you sleep, brought calm to the auditorium. The whole auditorium stood and gave the artist a huge ovation. Of course, the ovation that was much deserved, for they had given us the biggest show of our lives.

Afterwards, I had tickets for Yamatsuka Eye’s DJ set at the Puwaba’s after party in the Working Men’s club. It’s a nice and funny place for a party, with the best bartender in town, a friendly, educated cross-dresser in his mid-50s. Puwaba has a good reputation for running parties around London. I remember one at the Mythic Grosvenor in Stockwell that was really nice. Even the girls looked at me.

With still enough stuff in my pocket to finish the night in a bad way, I started my tube trip directly to Bethnal Green, and the choice to be only a centimetre away from Yamatsuka Eye. When I arrived at the venue I could see a lot of people waiting outside to enter. “Fuck”, I thought, “gonna be a fucking madness.” The two tastes of stuff that I did in the tube on my way didn’t help my anxiety.

But luckily for me, only ticket holders were allowed. Nearly 200 were inside. There were a lot of people, but it was nice.

There was a DJ playing fun electronics for a high on top audience that danced like they were possessed, thanks to the yellow Rolls Royce that ran over the venue. Then suddenly the DJ introduced the famous Asian guy that’s supposed the people dance to death. Big mistake.

He started to connect all of the electronic devices—computer, midi controller and some other stuff that I couldn’t see. Instead of just spinning song, he developed another gig. It was an amazing session of distorted percussion African rhythms, sound manipulation and noise.

Five minutes and no one was dancing, the party people started to leave the room and in a little while there were only there a few of us left enjoying this amazing Avant-garde electronic set. Another phase of Yamatsuka’s musical career, fucking amazing, and just two centimetres away from my face.

It was really emotional watching the DJ set because of the feeling that Yamatsuka was developing. It was like it was happening in my living room. When everything finished I tried to catch a few words from him for this article.

“Mr. Yamatsuka, Mr Yamatsuka, I would like to speak with you one second,” I said. No response.