On Tuesday I went to see Sissy, if you haven’t heard of them before, they’re a three piece punk group from Dublin currently on a U.K. tour promoting the recent release of their debut EP. It all started here in London at Power Lunches. This venue has never been my favourite, I try to avoid it as best I can, but these guys were worth the struggle of having to pay an astronomical price for a can of Kronenbourg.

Their set started off with a great crack from bass player, Michelle. “Thanks for all the people that moved from Dublin to London to see us,” she said. Her light hearted commentary set the crowd at ease. I didn’t really know what to expect, but from the offset I was hooked. I thoroughly enjoyed every song and the stage patter.
Being a garage freak, I was very pleased that some of the songs consisted of mostly four chords, especially on my favourite track, “Nothing”. I’m tempted to say that there was also a touch of power pop in the material, but the set was much more raucous, and I prefer it that way. It was all delivered in the most exciting thrall of energy, backed by Eoin’s very capable drumming. Before the 30 minutes were through, Leigh, Michelle and Eoin rounded off a rather smashing set with their hit “Sail & Rail”, another standout track from their cassette (now sold out).
Tonight Sissy play Norwich and then continue on to Leeds and Sheffield before finally topping it all off in their hometown, Dublin. If you’re interested in catching them while they’re in the UK, visit the event page, and while you’re at it buy a T shirt too!
-Tom H. Wing 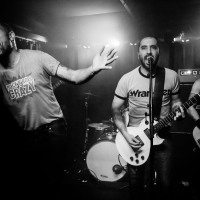