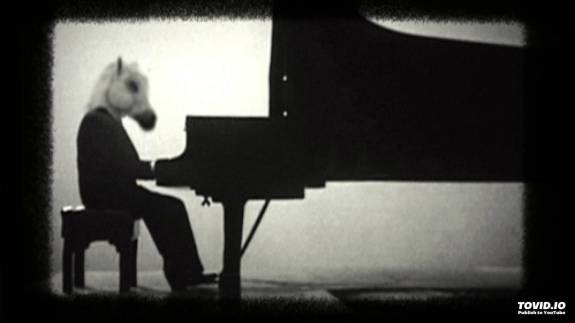 Almost exactly eight-years-ago, I went to see Daniel Johnston and Friends perform in Glasgow. Mark Linkous, the driving force behind the musical project, Sparklehorse, was one of the Friends, meaning he acted as a support as well as Johnston’s backing band. As part of his support act he performed the Most Beautiful Widow, and unexpectedly Johnston appeared to sing the chorus.

At 20, I hadn’t heard much Sparklehorse before, but the song got me hooked. When my friend told me that Union Chapel were screening the debut showing of the Sad and Beautiful World of Sparklehorse I had to go. A setting I knew would provide a mug of hot chocolate to console myself during the inevitable suicide tale.

Before showing the film a few bands performed, and then the organisers, including the directors Alex Crowton and Bobby Dass, let us know that having heard about the premier of the film in London. David Lynch had gotten in touch to ask them to play a song Mark Linkous had recorded for him. The film had never been played to anyone – an instrumental piece every part as haunting and beautiful as one comes to expect from Linkous, or used to expect when he was still in this world.
In case the film’s title wasn’t enough, the piece set the tone perfectly. As the sun began to set in the church windows, my friend and I got our mugs of hot chocolate, settled into the pews and prepared our hearts to be broken.

The film was really well researched, and its charm comes from placing the viewer in Linkous’ shoes throughout – showing what his drives would have been, the views from his home, playing his whisper over these images as opposed to showing straight up interviews of Linkous. There are shots of a lonely looking white horse dressed in a suit, grainy photos and images, but not all of it has been spliced together from memories or memorabilia.
A lot of what is seen has been shot especially for the film, which is odd considering it deals with a musician who committed suicide. There was something always terribly dark and depressing about Sparklehorse. Songs about love were filled with melancholy. Songs about sadness were packed with beautiful poetic lines.
There was something lonely about Linkous that came across in his music. This documentary has grasped this idea and played on it to perfection. It’s not for the sake of being sad or depressing, it’s for the sake of Linkous’ legacy. He was dark. He wasn’t a tortured soul during his whole career. That darkness was always inside him and the film doesn’t shy away from showing that. In fact it is something his longtime friend Suzanne Vega explicitly points out more than once.

Despite Lynch’s contribution to the film – mentioning when he appeared on Sparklehorse’s final album, Dark Night of the Soul, and many known musicians’ appearances alongside Vega’s in the documentary, the shining star was the lesser-known Angela-Faye Martin.
Martin, a singer-songwriter and close friend of Linkous’ narrates the film with writings alluding to his life. She is featured throughout, telling us about how Linkous lived, how he worked, how he told jokes, and how life just eventually began to take his toll on him.
When Linkous eventually took his own life, following and mirroring the death of one of his closest friends Vic Chesnutt, Martin suggested that although it was heartbreaking it wasn’t completely surprising. That was something that the film seemed to suggest the whole time, and it was something the music of Sparklehorse suggested the whole time too.
It was nice to watch a documentary that didn’t glorify the protagonist’s death. The suicide, a gunshot to the heart, wasn’t something the viewers hadn’t expected, of course. But it was still portrayed in the same soft, gentle, melancholic way that the rest of Linkous’ life was.

As far as music documentaries go, it lacked the polish and finesse of other recent films, such as Montage of Heck. But in the same vein as Amy, it was all heart and quality. For any fan of Sparklehorse, it is an obvious must-see, but equally, this is the case for people who may not yet have discovered Sparklehorse.
The soundtrack is so steeped in his music, haunting each part of the narrative. Its subliminal message is to fall in love with it. You cannot watch this film and not fall in love, and end it heartbroken.