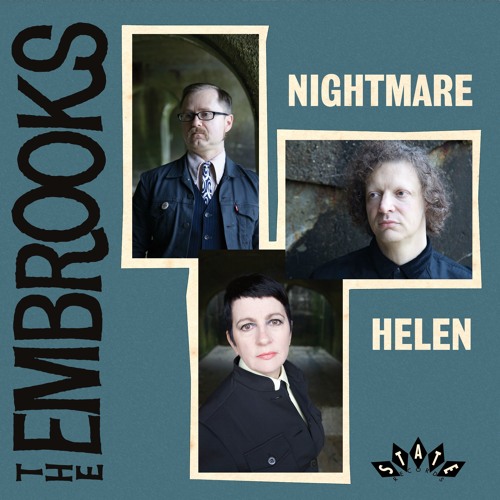 One of Britain’s more renowned 90s freakbeat/garage bands, the Embrooks, are back from their lengthy hiatus with a new single, the Nightmare/Helen 7-inch. It is their first record to be released in nearly ten years, so if you have heard these cats before, then you know you’re in for a treat. For the soon to be initiated, be sure to consider this new single as a confident expression of a maturing 1960s styled garage rock that maintains a resemblance of vibrantly youthful energy.

Further describing the Embrooks’ recording as a part of a storied revival movement would be adequate to say. It’s got the 60s beat like groove down to the T and has something that is both nostalgic and charmingly poppy, but with a certain mod flare. Overall, this is a new single to feel-good about. It’s a quality that almost invokes a nod toward what could only be the love child produced by the likes of the Kinks and the Pretty Things. The A-side track ‘Nightmare’ is a perfect mover and shaker to sink one’s teeth into. The B-side ‘Helen’ has an upbeat, carefree, bubblegum sound to it that leaves the listener with notions of contentment.

This single perfectly demonstrates the Embrooks’ take on a strong legacy of definitive British beat rock n’ roll, with a tone that is familiar and true. This little bit of black wax is a sure instigator and would do best alongside a collection that suggests taste inspired by the neat and sophisticatedly suave. So, if the Nightmare/Helen 7-inch has not yet found itself in a rotation of among your records, then you should be rethinking some of the more serious aspects of your life. Now, put on your three-piece suit, jump into some ankle boots, drop the needle onto this beauty and start mixing about.