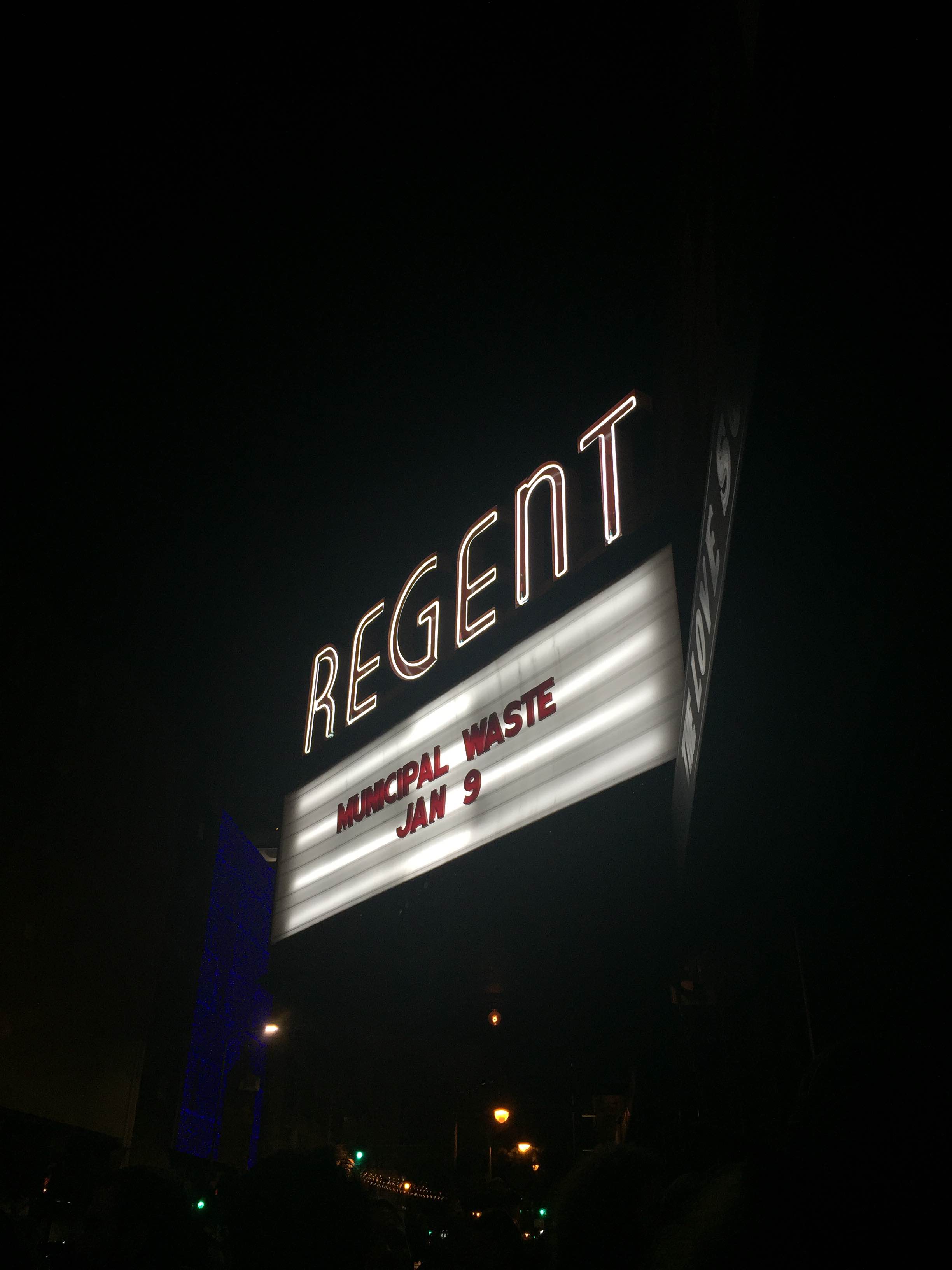 The timing of my most recent US trip was perfect– I got to go to Lemmy of Motörhead’s memorial meeting at the Rainbow Bar & Grill on Sunset Strip, and I got to go to Show Your Scars festival– an underground metal fest in Downtown Los Angeles. I love going to grindcore metal shows. I probably wouldn’t immediately choose metal as my soundtrack of choice, but the feeling at a metal show is nothing like how they sound on a record. It’s much less serious and angry, and much, much more fun– just a ton of sweaty people in a room having a great time.

I swung by The Rainbow to see the Lemmy memorial and get snapped in the background of the mourners’ photos of the flowers and shrines surrounding his favourite bar. I nipped past Downtown in an Uber to get tattooed, then called upon the help of a guy I started speaking to on Instagram (but never met)  to come collect me in his pickup truck and drive me the ten minutes to The Regent. This unexpected fun is exactly how these kind of events should begin. I’m an idiot, and so I didn’t have my phone working which meant I had to rely on my Insta-friend to transport to the show, which involved a lot of waiting and a lot of missed bands. The shows started at 2pm– I arrived at 9pm. This meant I only caught the last three bands. It was a bummer, but at least I can say with complete self-belief that they saved the best ‘til last (although I’m gutted I missed Municipal Waste’s sister-band, Ghoul).

Ben and I arrived, hurriedly walked down the street under a ton of sparkling lights and passed a ton of cool-looking business buildings, and then came upon the metal crew– covered in denim and studs, there was no missing them. The Regent is a great venue. There are different levels so it’s hard not to get a good view of the bands playing. I saw the tail end of Terrorizer– not much to say, but it was rad. I witnessed a lot of metalheads thrashing their hair on the platform by the merchandise in painful humidity. I searched for Municipal Waste’s “Let’s Build A Wall of Death” t-shirt, and was gutted to see that pretty much every piece of merchandise for all the bands was gone– it pays to arrive on time, and to have a phone that connects to Uber.

Next on were Repulsion, playing what they claimed on posters to be the only West Coast show they would play in 2016. So fast, so fun. Metal bands never take themselves too seriously, and that is what makes their live shows so much better than bands who take everything seriously – it is all so fun. Halfway into the set they performed Motörhead’s “The Hammer” after getting the sold out crowd to chant, “LEMMY! LEMMY! LEMMY!” with their fists in the air, but also in tribute to Philthy. It ruled. Lemmy ruled, and vocalist Scott Carlson did a mean Lemmy. They finished their set to a round of applause and from where I was standing, a sold out crowd of satisfied fans.

After trying to get a spot to look at the merch stand for what seemed like a million hours, Ben and I went upstairs to watch Municipal Waste from the balcony. This idea was a great because of circle pits. Vocalist Tony Foresta is hilarious. He laughed throughout the whole set. With the audience, at the audience and at his friends at the side of the stage. A stage diver ran up behind him at one point and stole a six pack of beer as guitarist Ryan Waste caught him, giving him a boot to the leg, Again, Foresta just shrugged and laughed saying, “well we didn’t pay for ‘em!” I just love when people are so obviously having a good time, and Municipal Waste do! The crowd parted when the band told them to, the security stopped preventing people from stage diving when the band asked. They never got pissed off at that one girl who kept jumping onstage to film herself with each band member– they kind of welcomed that terrible display. They also called out Donald Trump– “fuck the wall he wants to build! Let’s build a WALL-OF-HATE!” Yes, let’s.

None of it stood out, I’ll admit, but that’s just because the whole thing was start-to-finish fun, funny and entertaining. Again, it’s not the sort of thing I could sit and listen to at home, but I will for sure go out of my way to go and see these guys again.