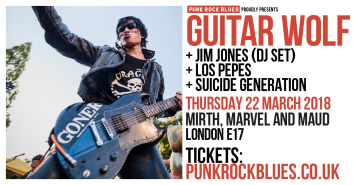 Japan’s jet rock n’ roll gods, Guitar Wolf, are back on tour again and hitting the stage in London this Thursday at the Mirth, Marvel & Maud in Walthamstow.

If you don’t know what “jet rock n’ roll” is yet, it’s time to get caught up real fast by checking out their ‘unique combination of extreme volume, heavy distortion and screaming.’

If you enjoyed our resident writer, Justin Crumpton’s piece about the Japanese music scene, then there’s no better band to catch live.

“Guitar Wolf is a complete energy overload that is akin to being in the blast zone of of a sonic atom bomb explosion,” said Rupert Orton of London-based promoters, Punk Rock Blues.

Guitar Wolf are true performers and always put on an amazing live show. I’ve only seen them once before, back when I lived in the States, so while they do tour pretty often, I’m still excited to finally catch them on this side of the world.

Sadly, Suicide Generation won’t be taking to the stage with our beloved Cretin Crowler, who has left us for America, but I’m sure singer, Sebastian, will happily roll around the stage and kick up a fuss to help get you ready for Guitar Wolf to take the stage.

As for Los Pepes, this is one of only two London-area shows the boys have booked right now until July, so it seems like just as good a time as any to go out and see our pals while you’re at it.

The event is open to people 18 and over. Don’t buy tickets if you’re not of age, ya’ll, you won’t be let in!

Doors open 7.30pm, so go grab your tickets while you still can. See you there!