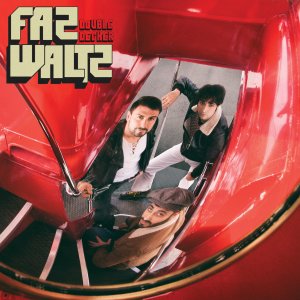 Faz Waltz’s new album Double Decker is a worthy successor to their already rich catalogue of music. Since the release of Callin’ Loud in 2016 it’d almost be a surprise if Faz Waltz could top songs like ‘Good Time Is Callin’ Loud.’

However, with Double Decker, fans will be pleased to find an album filled with bangers, catchy anthems and ballads meant to invigorate the soul. Much like with their previous material this album captures the boot-stomping essence of Jook, with Slade meets a Revolver era Beatles-like rock n’ roll sound.

This new album channels high-voltage glam and Little Richard-influenced rock n’ roll in tracks like ‘Shakin’ Like a Hooligan.’ With rolling Slade-like electrified riffs, this song is meant to bounce around to. This tune beautifully sets the tone for Double Decker, as this track grab the listener’s attention and holds it firm.

The second track, ‘Julie’ is an infectious love song. This serves as Double Decker’s single. It’s punchy with captivating hooks. ‘Julie’ invokes a nod of Mud meets Hammersmith Gorillas. This is a song meant to be bopped to. Other tracks like ‘Right On’ and ‘Oh Penny’ also fall into a similar pattern.

Double Decker also boasts some slower songs that invite notions of reflection. This is particularly evident in the track ‘Is this the Way.’ In it, Faz La Rocca sings of the teenage dream of living the rock n’ roll lifestyle.

The tone of this track offers remorse, as though living a life of glitter and gold is life as it should be. For me, it’s a song that I can relate to, since finding meaning in subcultural identity within a world of monotony is challenging, to say the least.

This is especially relevant since there are enormous social pressures to “grow up” and treat rock n’ roll as “just a phase.” But, as the song boasts, this is life as it should be.

Picking up the pace after ‘Is this the Way’ is ‘Jive Jive.’ Upbeat and catering to a romantic ideal of living in the moment and being optimistic, this track captures the essence of what it means to exhibit everything that is positive revolving in glam.

In all, Double Decker is a great album to add to any record collection. Especially, if yours is a record library that has The Sweet or Hamlett on its shelves.

Faz Waltz are superb at blending a style meant for the junkshop with a sensibility that exudes what it means to be passionate about rock n’ roll. It’s romantic, idealistic and somewhat nostalgic for a time full of positive promise. Double Decker ought to be spinning on any self-respective turntable. So, get it now.